The California Gold Rush is one of the most well-recognized and renowned events of the state’s history, in addition to being largely responsible for the rise in population after the Spanish settlement along the coast. However, the image that immediately comes to mind is traditionally the placer mining and shaft mines of the Sacramento and Nevada County areas. The hydraulic mining that flourished in the hills of Nevada County is vastly overlooked, though many might recognize the rusted monitors that often decorate the lawns of buildings and museums. Indeed, these large water-driven operations left their mark on California, regardless of their lack of publicity.

One of the larger Hydraulic operations was the Malakoff Diggings just outside of the North Bloomfield township. Ironically, this town was also initially written off. In the spring of 1851, three placer miners staked their claim on Humbug Creek. Roger and Owen McCullough with Owen Marlow found the mother load panning the creek. But after a time, their supplies ran low. They sent one of the McClulloughs to Nevada City to restock their supplies, making him promise not to give away their location.

It was alcohol that did the three miners in. McCullough imbibed while in town and bragged about his fortune, though he didn’t mention where he obtained it. And so, nearly 100 hopefuls followed McCullough back to the claim. They were disappointed, however, when they didn’t strike it rich. Many left for Nevada, calling the site a “humbug,” hoping to take advantage of the strikes they heard tell of in Nevada. A few stayed behind and set up camp along the creek. 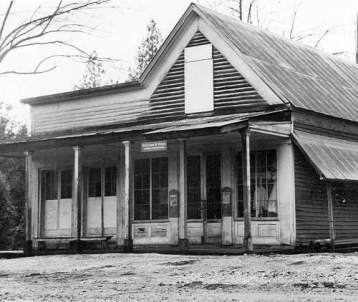 Owen Marlow was one of the men who stayed. He sent word to his friend, William Carter in New Orleans. Carter set out for California six months later by way of the Isthmus of Panama. Upon his arrival at the town site, he began work on the Lafayette hotel, which he completed in 1855. But by that time, his was not the only establishment in the area. In 1856, a general store was up and running, as well as a saloon to service the 400 residents. The next year, they applied for a post office under the name, “Humbug.” That name was denied due to the fact that too many towns were “humbugs.” They tried, “Bloomfield,” but were forced to add “North” onto the name because of a Bloomfield in Sonoma.

Much like the rest of California, eventually, the gold on the surface began to disappear. Miners left, and the revenue for businesses declined. A sort of recession set in until businessmen from urban areas came together and purchased the miners’ claims. This was the beginning of the North Bloomfield Gravel Mining Company, or the “French Company.”

With the lack of surface gold, miners resorted to digging out the hillsides. However, three men by the names of Eli Miller, Anthony Cabot and Edward Matteson, put their heads together and discovered a much faster, more efficient way to get at the gold in the hills. They called it, “hydraulic mining.” 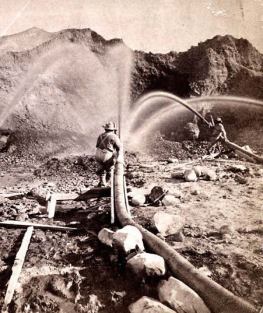 In the year 1852, Cabot engineered a hundred foot, six inch diameter hose from strips of saddle bag, which he attached to a three foot funnel of Miller’s making. They used the hose to bring water to their essentially dry claim. It was Matteson who suggested the addition of a three-foot nozzle with a inch and a half outlet be mounted on the discharge end of the hose. The momentum of water moving quickly downhill proved them with enough water pressure to begin washing away the hillside into a sluice, where they could sift through the gravel for gold. The year 1856 brought about the use of wrought iron pipes instead of hoses. They called the water cannons, “Hydraulic Monitors.” Matteson was credited for the invention because he was the one who made the invention public. Ten years later, French Company was incorporated.

The arrival of hydraulic mining is what grew Humbug from a little mining town to the fast growing, North Bloomfield. It is estimated that the, hydraulic mines in California produced $11 to $13 million a year in gold. But this great profit was not without its disadvantages. One of the greatest tragedies of this great era of gold mining was the ecological effect. These millions in gold were discovered because, “miners along the Feather, Yuba, Bear, and American rivers ripped up 1,295 million cubic yards of gravel – enough to cover Washington D.C. with a blanket of debris nineteen feet thick” (Hill, 118). By the year 1868, some of the riverbeds were higher than the town streets. The city of Marysville had to construct levees to prevent flooding which, of course, inevitably happened in 1875. Concurrently, the Malakoff mine in North Bloomfield had reached its peak of operation, employing seven hydraulic monitors.

This was the age of great invention for the hydraulic mines, especially Malakoff. Not only were great profits being reaped because of the monitors, but it was also the site of the first long distance telephone line. The Ridge Telephone Company was organized nearby in North San Juan and owned by several hydraulic mines, including the French Company. They ran a line that was sixty miles long with twenty-two stations for the management of ditches and claims. About that same time, electric lights powered by a hydraulic generator were installed so that the mine could be operated twenty-four hours a day in two shifts from six am to six pm.

But regardless of the great success, the farmers were angry, and a series of suits began to find their way to court during the 1880s. In 1881, mines along the Yuba and Feather rivers were ordered to shut down. In a desperate attempt to stay open, the mines offered to build debris dams in exchange for the dropping of the legal proceedings. The attempt, however, was a little too late. Already, a snowball was beginning to form. The year 1883 brought on the Woodruff v. North Bloomfield case with Judge Lorenzo Sawyer presiding. The hydraulic mining companies argued that they were in the area first. One of the farmers replied, “No one should use his property so as to damage another” (Hill, 124). And so, Judge Sawyer came to the conclusion that while hydraulic mining was in and of itself legal, the dumping of debris, was not. On January 7, 1884, it was declared that, “All tailings must stop.” The conclusion of the case became known as the Sawyer Decision.

Mining became difficult after this case. Some companies found ways to cooperate with the requirements, while others simply closed. For the French Company, it was a mixture of both. In 1886, they were found in contempt of the Sawyer decision and fined. This prompted them to install and elevator system to collect debris and retain it in a holding pond. However, this hampered production and decreased profits, though it did satisfy the Sawyer Decision.

The situation only became more difficult for the mine when the District Court declared it illegal to mine without a permit in 1896. Once again the Malakoff mine was in contempt and fined. These fines eventually became too much for the company and a depression was settling over the now dwindling town of North Bloomfield. The French Company was forced to close in the late 1890s because of debt. 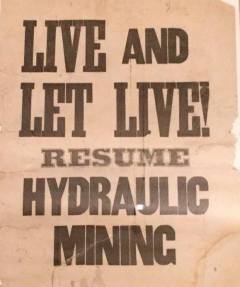 At the turn of the Century, the population of North Bloomfield was down to 730 people. Jobs were disappearing because of the closing of the mine. In the year, 1910, the North Bloomfield Gravel Mining Company was unincorporated. Some locals held onto the legacy and the dream of a fortune in gold and continued to “bootleg operate” the pit until around 1930. But due to the first and second world war drafts, the town was ever-shrinking. Eventually, the general store closed. Twenty-five years later, the state park was established.

Now, it is only the legacy of a gold dream that remains. The memories and stories of men who thought they found a better way to mine the ground for hidden riches. Maybe it was their ignorance in the pursuit of a dream – their ambition – that created the sad ending. But isn’t that the epitome of California? The promise of more and the choice to risk failure in a wild attempt to grasp at straws?
Bibliography