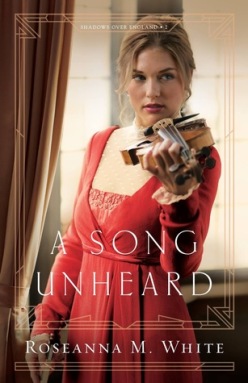 Since I read A Name Unknown, I’ve been looking forward to reading A Song Unheard. Roseanna M. White is quickly becoming one of my new favorite writers. Her stories are engaging, the romances are interesting, and her messages are fitting. As I’m finishing this review, I’m beginning to read An Hour Unspent. If It’s anything near as good as its predecessors in the Shadows Over England series, it should be amazing.

Willa Forsythe is both a violin prodigy and top-notch thief, which makes her the perfect choice for a crucial task at the outset of World War I–to steal a cypher from a famous violinist currently in Wales.

Lukas De Wilde has enjoyed the life of fame he’s won–until now, when being recognized nearly gets him killed. Everyone wants the key to his father’s work as a cryptologist. And Lukas fears that his mother and sister, who have vanished in the wake of the German invasion of Belgium, will pay the price. The only light he finds is meeting the intriguing Willa Forsythe.

But danger presses in from every side, and Willa knows what Lukas doesn’t–that she must betray him and find that cypher, or her own family will pay the price as surely as his has.

This one picks up right where A Name Unknown left off – Mr. V has an assignment for a member of Barclay’s “family,” and Willa is perfect for the job. It only helps that her mark is fascinated by her own skill with a violin. In fact, he can barely believe someone could have such proficiency having learned by ear (if you’re wondering if this is actually possible, I have an uncle who reads very little music, but can play guitar by ear). So in order to get to know the intriguing Willa Forsythe, Lukas offers to teach her a bit of theory and technique. Little does he know, his excuse to spend time with her, is her excuse to find out where his “key” is hidden.

The plot thickens when Willa discovers she isn’t the only one sent to find the key – the Germans are out for it to, and they’ll pay a pretty penny to get a copy of it. But the key is only one part of Lukas’ father’s legacy. It’s the cypher machine they’re after. Except, the “machine” isn’t a machine at all, it’s a person that Lukas will do anything to protect. No one can know.

So much tension! I loved it. It reminded me of something like Judith Pella’s WWII series crossed with Sarah Sundin (minus the military characters), and set during the Great War. I think that even if you’re not a history buff, you’ll enjoy this. And there’s so much great detail about the invasion of Belgium. I think you’ll walk away with a better understanding of some of the politics of the first world war. The history, however, does not overpower the story, it merely provides a fantastic framework in which the characters operate. 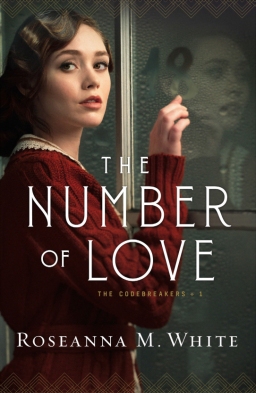 And I think I timed my review just perfectly since Roseanna White just debuted the cover for her new novel, which just happens to explore Lukas’ sister, Margot! So if you enjoy A Song Unheard, there’s more of the De Wilde family to look forward to.

Three years into the Great War, England’s greatest asset is their intelligence network–field agents risking their lives to gather information, and codebreakers able to crack every German telegram. Margot De Wilde thrives in the environment of the secretive Room 40, where she spends her days deciphering intercepted messages. But when her world is turned upside down by an unexpected loss, for the first time in her life numbers aren’t enough.

Drake Elton returns wounded form the field, followed by an enemy who just won’t give up. He’s smitten quickly by the too-intelligent Margot, but how can he convince a girl who lives entirely in her mind that sometimes life’s answers lie in the heart?

Amid biological warfare, encrypted letters, and a German spy who wants to destroy not just them but others they love, Margot and Drake will have to work together to save themselves form the very secrets that brought them together.

One thought on “Book Review: A Song Unheard”