All avid readers of Christian Romance know one thing: There are certain tropes we just love to read. Sometimes, you pick up a book and love it so much, you want to read more like it. So here, for your ever-growing TBR “to be read” pile, are a list of titles that include Deaf and Hard of Hearing characters – something that is just so awesome to me. I took a couple ASL classes in college, and their history is just fascinating… heartbreaking… filled with ingenuity… Anyways. Here we go.

Increasingly wary of her father’s genetic research, Rachel Kramer has determined that this trip with him to Germany—in the summer of 1939—will be her last. But a cryptic letter from her estranged friend, begging Rachel for help, changes everything. Married to SS officer Gerhardt Schlick, Kristine sees the dark tides turning and fears her husband views their daughter, Amelie, deaf since birth, as a blight on his Aryan bloodline.

Once courted by Schlick, Rachel knows he’s as dangerous as the swastikas that hang like ebony spiders from every government building in Berlin. She fears her father’s files may hold answers about Hitler’s plans for others, like Amelie, whom the regime deems “unworthy of life.” She risks searching his classified documents only to uncover shocking secrets about her own history and a family she’s never known.

Now hunted by the SS, Rachel turns to Jason Young—a driven, disarming American journalist and unlikely ally—who connects her to the resistance and to controversial theologian Dietrich Bonhoeffer. Forced into hiding, Rachel’s every ideal is challenged as she and Jason walk a knife’s edge, risking their lives—and asking others to do the same—for those they barely know but come to love.

I got to read this one a couple years ago and wow. It’s intense, but endearing, tragic, hopeful. All the good stuff. Remember to learn your history so you don’t repeat it, though.

A Tale of Family, Brotherhood, and the Healing Power of Love

After the tragic death of her husband, Aven Norgaard is beckoned to give up her life in Norway to become a housekeeper in the rugged hills of nineteenth-century Appalachia. Upon arrival, she finds herself in the home of her late husband’s cousins—three brothers who make a living by brewing hard cider on their three-hundred-acre farm. Yet even as a stranger in a foreign land, Aven has hope to build a new life in this tight-knit family.

But her unassuming beauty disrupts the bond between the brothers. The youngest two both desire her hand, and Aven is caught in the middle, unsure where—and whether—to offer her affection. While Haakon is bold and passionate, it is Thor who casts the greatest spell upon her. Though Deaf, mute, and dependent on hard drink to cope with his silent pain, Thor possesses a sobering strength.

As autumn ushers in the apple harvest, the rift between Thor and Haakon deepens and Aven faces a choice that risks hearts. Will two brothers’ longing for her quiet spirit tear apart a family? Can she find a tender belonging in this remote, rugged, and unfamiliar world?

I love Joanne’s writing. It just captivates me every time. And the cool part about this one is that after the release, she did an author live chat with an ASL interpreter to demonstrate the signing used in the story. Also really cool – this book has been translated into multiple languages and apparently the translators took care to also adjust the language to reflect signing in those countries (yes, there are multiple sign languages). 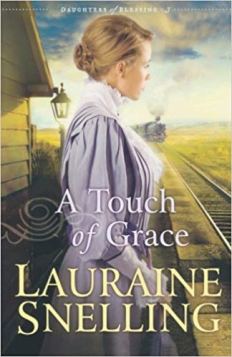 A TOUCH OF GRACE by Lauraine Snelling

She thought she knew what she wanted in life . . . then Jonathan arrived.

Eighteen-year-old Grace Knutson loves Blessing, North Dakota, and sees no reason to leave. She’s more serious-minded than her twin sister, Sophie, and very sensitive to the feelings of others. In spite of her family’s disapproval, Grace has always had a soft spot in her heart for Toby Valders, for she’s seen the vulnerable side he keeps well hidden.

Jonathan Gould, the handsome scion of a wealthy New York family, creates a flurry of anticipation and speculation when he arrives in Blessing. Jonathan’s father wants him to learn the value of manual labor and to appreciate the accomplishments of those not born to wealth. Surprisingly, the “city boy” takes to farm life and actually enjoys working from dawn to dusk alongside the others. Soon he finds himself inexplicably drawn to gentle, courageous Grace.

But Jonathan’s affection presents an agonizing dilemma for Grace. Is he truly the one her heart desires?

This is one of the first books I’ve read featuring a Deaf character. It definitely left a mark on me… one of the reasons I wanted to learn ASL. It’s also set during a period that was rather controversial in Deaf history – much like the story in It Happened At the Fair (mentioned below) – when Oralism was the popular approach (lipreading and speaking) with Deaf education. However, this one does feature more signing (though Grace does lipread and speak). Her family is far more supportive than might have been normal at the time.

When unexpected circumstances leave Honor Penworthy destitute after the death of her grandfather, she is forced to leave her Maryland plantation—and the slaves she hoped to free—and seek refuge with a distant relative. With no marketable skills, her survival hinges on a marriage arranged through the Quaker community to local glass artisan Samuel Cathwell. Samuel is drawn to Honor, but he has been unwilling to open his heart to anyone since scarlet fever took his hearing as a child.

A move west brings the promise of a fresh start, but nothing in Honor’s genteel upbringing has prepared her for the rigors of frontier life with Samuel. Nevertheless, her tenacity and passion sweep her into important winds of change, and she becomes increasingly—though secretly—involved in the Underground Railroad. Samuel suspects Honor is hiding something, but will uncovering the truth confirm his worst fears or truly bring them together as man and wife?

Set against the backdrop of dramatic and pivotal moments in American history, the Quaker Brides series chronicles the lives of three brave heroines, fighting to uphold their principles of freedom while navigating the terrain of faith, family, and the heart.

This book actually takes place around the time American Sign Language as we know it was forming. Which is neat. Our current ASL is a mixture of home signs already used in America pre 1815-ish and French Sign Language. But this was so fun because first… it’s an arranged marriage. Second, it explores some of the difficulty and rejection that goes with being misunderstood or different. But make no mistake… Samuel is a creative, competent, fascinating character.

IT HAPPENED AT THE FAIR by Deeanne Gist

A transporting historical novel about a promising young inventor, his struggle with loss, and the attractive teacher who changes his life, all set against the razzle-dazzle of the 1893 Chicago World’s Fair.

Gambling everything—including the family farm—Cullen McNamara travels to the 1893 Chicago World’s Fair with his most recent invention. But the noise in the fair’s Machinery Hall makes it impossible to communicate with potential buyers. In an act of desperation, he hires Della Wentworth, a teacher of the deaf, to tutor him in the art of lip-reading.

The young teacher is reluctant to participate, and Cullen has trouble keeping his mind on his lessons while intently watching her lips. Like the newly invented Ferris wheel, he is caught in a whirl between his girl back home, his dreams as an inventor, and his unexpected attraction to his new tutor. Can he keep his feet on the ground, or will he be carried away?

THIS ONE. Oh my heart. This one. Unlike the others, the main character in this one, Cullen, is Hard of Hearing. And Deeanne handles the feelings about signing in the late 1800s, early 1900s so well. Believe it or not, Alexander Graham Bell was a huge player in the Oralism movement (his wife was Deaf). And so, that is the reason why our lovely Della is a lip-reading teacher, not a sign language instructor – which she discusses with Cullen when he asks about signing, as it’s not the “correct approach” for the time in terms of Deaf education. Anyways, fascinating stuff.