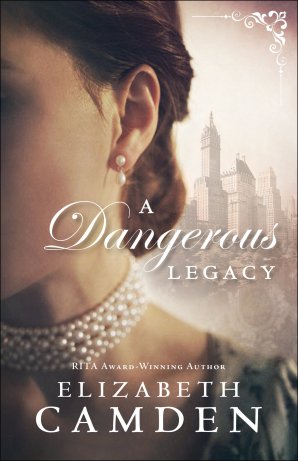 It was about 3am when I finally turned the last page on this one. And as I have said in the past – I’ll say it again – read the author’s note (pg. 335) first!! I absolutely love these historical notes, they add such a richness to the story before you even begin. Anyways… I think you’ll like this one as moral dilemmas arise with questions of greater good and ignoring your conscience pull the characters into a suspenseful journey that will most definitely fill up your afternoon, evening… morning…

Lucy Drake’s mastery of Morse code has made her a valuable asset to the American news agencies as a telegrapher. But the sudden arrival of Sir Colin Beckwith at rival British news agency Reuters puts her hard-earned livelihood at risk. Newly arrived from London, Colin is talented, handsome, and insufferably charming.

Despite their rivalry, Lucy realizes Colin’s connections could be just what her family needs to turn the tide of their long legal battle over the fortune they were swindled out of forty years ago. When she negotiates an unlikely alliance with him, neither of them realizes how far the web of treachery they’re wading into will take them.

I’ll admit, I hadn’t actually read anything by Camden up until this point, but after A Dangerous Legacy, I’ll trust her to tell a good story the next time I make a trip to Barnes & Noble. Her style is very plot driven with light and sweet moments mixed in that will leave you sighing. Her characters are well developed and I related to them quite a bit.

Lucy is of the determined variety, with some ideals that keep her fixed on her goals, except, some of her other desires have gone to the wayside as a consequence – the lawsuit against her uncle keeping her very lonely save for the company of her brother as it seems no one else is brave enough to step into her mess.

Colin, on the other hand, for all his snark, has the weight of the world on his shoulders, and believes there’s only one way out of his problems. There’s only one hitch in his plans… The charming girl from downstairs could make or break the engagement he’s been working on for months. He quickly finds that what he MUST do and what he WANTS to do are at complete odds. Unless perhaps, he can help Lucy win her lawsuit.

All that to say, I think I’ll give this one a four out of five stars. Between the intriguing themes, complex characters, engaging plot and intriguing history – I feel like I’m going to go read up more on insane asylums and telegraphy now – this story has plenty to offer.

I received a free copy from Bethany House in exchange for an honest review. All opinions expressed here are my own.

One thought on “Book Review: A Dangerous Legacy”